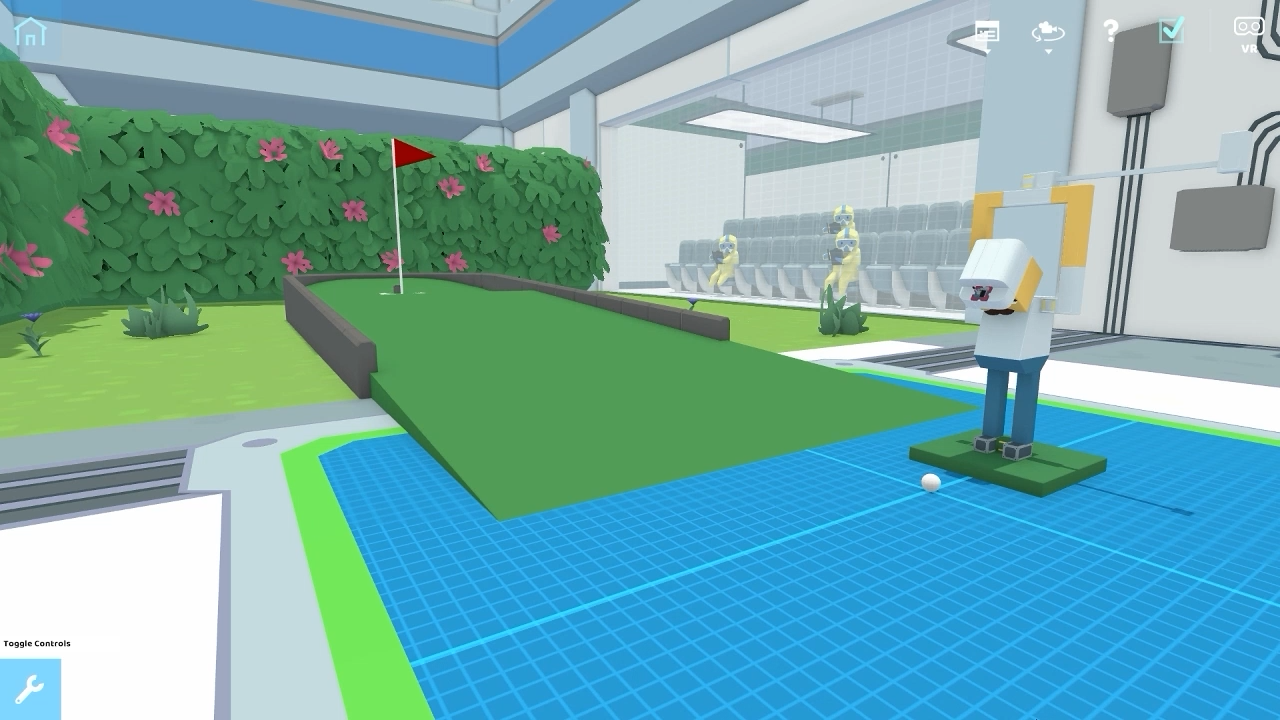 Last week, we talked about new camera and vacuum updates. This week, we’re unveiling some brand new RoboRepair Tutorials that were made after our Steam Next Fest demo!

For those that are new to this term, RoboRepair Tutorials are a collection of small challenges designed to help players learn the ins and outs of RoboCo such as how to resize a part, change joint types, and operate the Controls and/or Properties Menu. To learn more about these challenges, including why we made them, where they’re located in RoboCo, and more, make sure to check out our first devblog about them!

For RoboCo’s Early Access launch, we wanted to include at least one RoboRepair about the port assignment interface on our microcontroller. In real-world robots, you use physical wires to plug sensors, motors, and other controllables into ports on a microcontroller so that the microcontroller can communicate with them. RoboCo uses a similar concept of ports to handle the references to its controllables for players using Python scripting.

RoboRepairs are a good format for covering common gotchas that players might encounter, by giving them a broken robot and an opportunity to fix it. Ports are a good candidate for this style of tutorial because they are an intersection point between RoboCo’s user interface and the Python script a player has attached to a robot. So we designed a RoboRepair where a port assignment is missing and the player has to plug in the only controllable available before the challenge can be completed.

Understanding ports could help a player troubleshoot or modify a scripted robot they downloaded from another player off the Steam Workshop. And of course experienced coders will need to know where to set up port references and how to fix them when they break!

But enough about the educational value, I know what you all are thinking: What a glorious Dad bod on that golfer! We agree! Where did the golf theme come from? Well, to showcase a port assignment error, we wanted a robot to carry out a series of actions and fail when it reached one of the steps. If you’ve played golf, you’ll know that there’s little in sports more complicated than a golf swing!

I Am Not a Robot!

We also made a new RoboRepair about resizing pistons! Much like the ability to resize motors in order to increase their torque, the ability to resize pistons to make them longer is crucial to solving objectives in certain challenges (see a lot of robots from the playoff round of FGRC21). As such, we wanted to call special attention to this ability, especially since it could easily be missed, leaving players with oddly short pistons to work with.

When brainstorming possible themes for the RoboRepair, we recalled one of the earliest robots we made, back when RoboCo was a VR-only prototype internally known as RoboEngineers. During this time we built several whimsical contraptions as we developed a tone for the game, including a robot filling out the “I Am Not a Robot” captcha on a laptop. This robot really captcha’d our imagination, so we were excited to find that with a modified piston arm and an aesthetic refresh, this robot fit quite well as our RoboRepair tutorial for resizing pistons. So we’re happy to have this sneaky fellow back in the game again!

Other Things We’re Working On

Q4 2022 continues to approach and our team is working hard to make RoboCo the best Early Access game possible! Here’s a list of some of the things we’ve been working on behind-the-scenes:

Cleaning up defects and usability issues in challenges

Hooking up sound effects and reviewing with our A/V Director

A new robot building feature that will be revealed in a future blog!

And that’s it for this week’s devblog! Are you excited about these new RoboRepair Tutorials? Make sure to let us know in the Official RoboCo Discord! Next week, RoboCo’s QA Analyst Austin Smythe joins us to talk about what it’s like QAing on RoboCo!