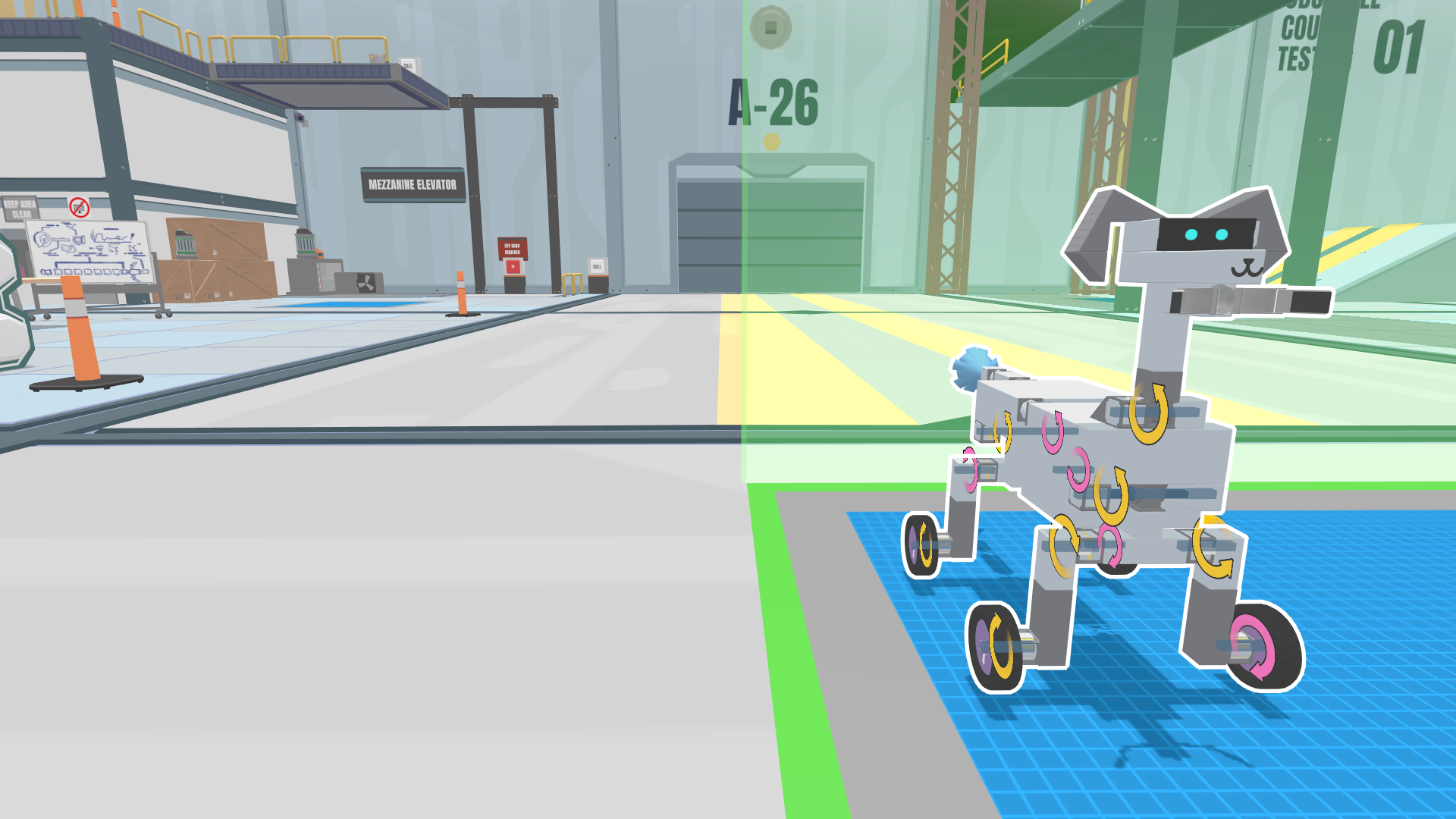 Hey all! RoboCo dev team here – back again with a couple of cool updates! First off, we’re excited to share that our team is currently gearing up for a big announcement – so keep on the lookout for more on that in the coming days! But in the meantime, we wanted to give you all a quick overview of a few of our latest development efforts – take a look:

Servo motors and sliding rod joints in RoboCo have already yielded some super cool outcomes, but let’s not rest on our laurels. That was all the way back in January 2020, and RoboCo is all about The Future! Sometimes you just want a more natural way to move objects linearly. Genuine, Grade A pistons are here to lift you up!

The lovably upbeat RoboCo Personnel tolerate a lot of malfunctions from the work-in-progress robot designs around them, but everyone has their limits. Make the humans too upset and be prepared to be reset!

We don’t recall anyone saying so, but truly experimental players of the PAX West or streamer preview builds may have noticed that the platform over which you build your robot didn’t really do much in the “Deliver a sandwich” challenge — though in the sandbox environment, the various build platforms did serve as checkpoint locations when returning to Edit mode.

In either case, the game didn’t technically stop you from building in an unexpected location away from the build zone platform, or at a size bigger than the challenge environment or the physics engine was meant to handle.

Fortunately, for the “Deliver a sandwich” challenge, it didn’t matter too much, since the sandwich you needed always dropped from the starting location. And most of us players likely wouldn’t even try anything else since it’s human nature to stick to the default bias of the camera starting in that location and to be indirectly controlled by seeing a platform underneath the robot that certainlylooks like the appropriate place to build.

Still, this was never meant to be a shippable solution. Some of our work-in-progress challenges — like one that involves getting to the other side of a gap — wouldn’t be as much fun if you could simply start on the other side.

So the build zone now is more than just a platform. This region is used to establish an assumed “forward” direction when placing parts. And it now also checks to see if all the robot parts are inside the zone. (You can turn off these visuals if you don’t want to see them.) If the robot doesn’t fit in the zone, you won’t be able to enter Play mode, but trust us, shameless cheaters truly experimental players, problem-solving is more fun with constraints!

We’re still learning how lenient we can be in the sandbox environment, but obviously that’s a different type of play and we plan to let you loose there as best we can!

So…what’s next for our team? We continue to refine our robot building interface, to add or refactor under-the-hood architecture that we need to build the game, and to design whimsical but tough challenges. We’ve been intentionally keeping much of our challenge design under wraps, but we’ll be working on a taste of things we can share while still preserving surprises for later!

As mentioned previously, we’ve got a big announcement in the pipeline, so keep on the lookout for more details on that over the next few days. As always, we invite you to wishlist RoboCo on Steam, join us on Discord, and stay in touch with our team right here on our dev blog. Until next time!